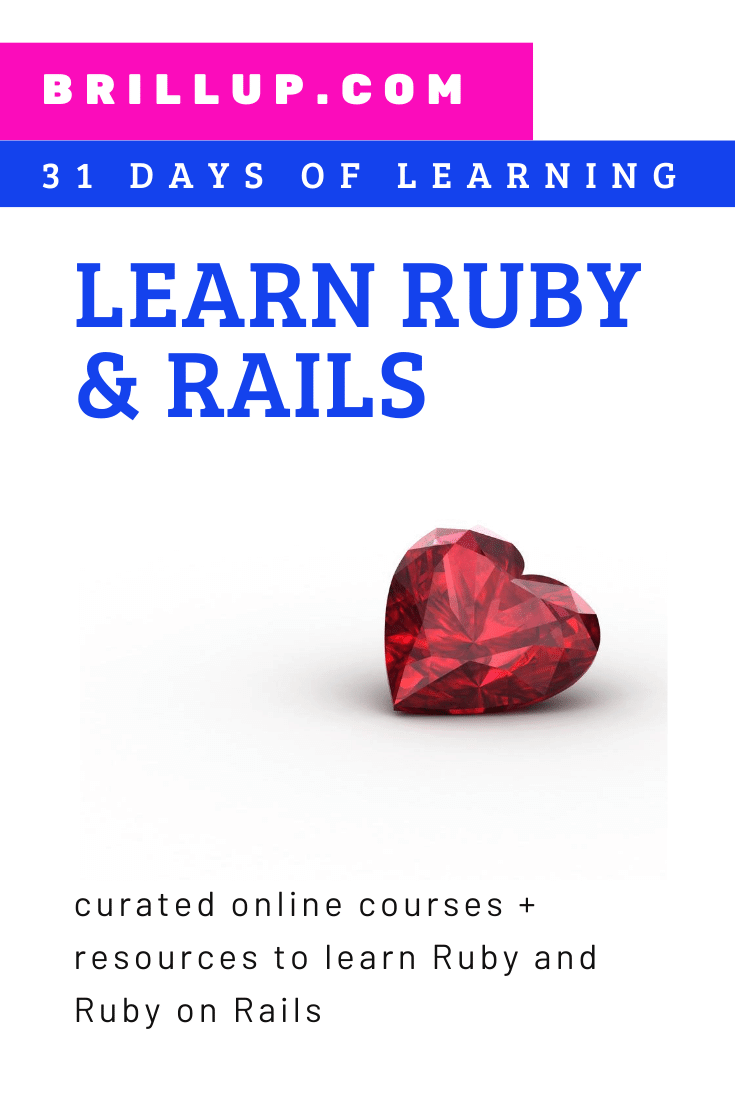 Keep going with our 31 Days of Learning: today we’re looking at learning Ruby and Ruby on Rails. Sign up to our newsletter to keep updated!

Ruby was designed to make programmers more productive because it was such a joy to program in it. Like Python, Ruby makes a great first language because it is relatively straightforward and there are a lot of good beginners’ resources plus a supportive community.

Ruby is an all purpose language, but where it has gained particular popularity has been in conjunction the web application Ruby on Rails, which as you might guess, is based on Ruby. Ruby on Rails or Rails as it’s more commonly known (also RoR, too), has a reputation for being one of the fastest ways to get up a functional version of your web app. But Rails isn’t just for prototypes and minimum viable products, some of the world’s biggest online platforms – like Shopify – are built on Rails.

While Rails is not as trendy as it was a few years ago, it has the advantage of now being a mature and well supported framework and is still one of the best choices for aspiring startups.

Codecademy’s Ruby course is mostly available for free and introduces you to the basic foundations of Ruby, using their browser based shell to remove any barriers to just coding.

While you’ll need more than Codecademy to learn Ruby well, it’s a great intro to the world of Ruby.

Chris Pine’s introductory book on learning Ruby is available completely free to read online. It goes through the basics of Ruby in an approachable style.

Learn the basic foundational building blocks of programming, starting from the very beginning. Existing developers will be able to quickly pick up Ruby syntax, while new programmers will enjoy a smooth introduction to programming concepts.

Programming & Back-end Prep (Ruby) – Launch School
Launch School take a very different approach compared to other online coding programs. Instead of bootcamps and learning things quickly, they advocate learning things slower for mastery. They have made their comprehensive Prep class available for free. Create a free account with Launch School to get access to this free course.

You can also check out their free Ruby tutorial online book

Learn Enough (to be Dangerous)

Michael Hartl’s Ruby on Rails Tutorial is legendary. It’s extremely well explained and will get you quickly up and creating your own Ruby on Rails web applications. There’s also the option to sign up to a membership that will give you access to all the Learn Enough courses (which include HTML, CSS and Javascript), along with a support community based in Slack.

Highly recommended is first completing Michael’s Learn Enough Ruby to Be Dangerous course so that you’re more comfortable with Ruby.

The Odin Project is a free and open source self-paced online bootcamp that curates some of the best Ruby and Rails resources to form their curriculum. It covers a complete full stack program and includes HTML, CSS and Javascript before moving on to Ruby and Rails.

If you want to extend your Rails learning, GoRails is an awesome resource that goes into more intermediate and advanced topics.

Join our Beta Test Club to get access to free resources, community events and sweet discounts